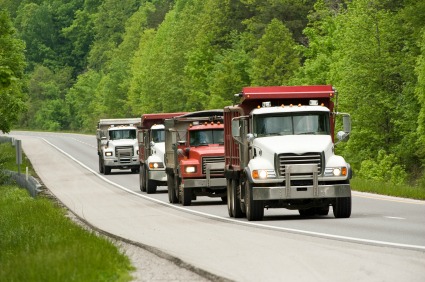 Interested in owning Mack dump trucks or you just wanted to know what it is like driving a Mack.

I will tell you my story of driving a Mack dump trucks. Twin Stick. I drove a Mack trucks twin stick early in my career. Drove around Washington D.C.. I thought the truck handled well and all the though it did not have a/c. I survived. Driving with twin sticks was interesting and it was easy to get use to. You just had a stick to go from low to high range and then you could move into your next gear. Here is a link you might fine interesting about Mack dump trucks. click here

The next time I drove a Mack was with a Tanker company. They purchased the trucks from Matlack that closed there doors. The trucks had close to 500 miles, day cabs with a five speed transmission pulling tankers form Ohio to East Coast to Texas. They were a little ruff riding but had very little brake down time. Leaving Mack dump trucks to Tanker Truck

The company was so impressed with those trucks. When it was time to buy new ones they bought the Mack MP-7 with a thirteen speed 2009.

I did not think that I would like a a thirteen speed with a tanker.I was wrong it was really nice. I was able to get a smoother shift with a tanker.

And when I was in the top gear. I shifted less going up hills ,I lost less momentum was able to keep my speed up. It was really nice.

The truck was equipped with computer programs that prevented the truck from skidding, ABS system TCS system which seemed to malfunction all the time. The warning light would come on indicating a problem.

There was a time that I went through two turbos. There was some problem with the manufacture of that turbo. I would say that Mack did there best to get me back on the road.

I like the mack with the features we had on it. The clutch was air assisted. And no I do not use the clutch that much, but it still nice to have a smooth and easy to push the clutch.

After the second time of replacing the turbos did not to have any more problems.

Over all I felt that I did not have to much trouble with the Mack. It started up OK in could weather and handled well in driving it tight locations and normal highway conditions.

I found a video that might be fun to watch on the Mack truck.

Click on the link below to find more information

Short Guide to a Pre-trip